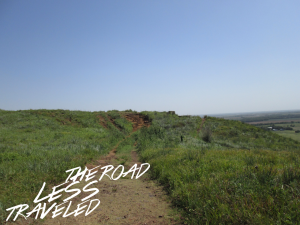 Life’s a journey, not a destination, yet so often it’s the end result that gets all of the attention.  What about those who are between the beginning and the end?  When they’re not creating the desired results, why is it assumed that they’re on cruise control when what some are actually doing is building a new superhighway because they find the road that’s always been traveled is becoming too rough or too busy?

It’s been recommended that one occasionally take a different route to work instead of driving the same one every day, just to break up the monotony of the daily grind.  It’s said to help gain new insights on the world that surrounds us.  Yet many companies do exactly the opposite when it comes to their processes and procedures.  And people resist change in the same manner.  “But this way:  is faster…is shorter…has fewer stop lights…has less traffic” they argue, so they refuse to even try.

What’s greater:  The risk of following the same path every day or the risk of venturing out?  Twenty years ago, the risk of staying the course was minimal.  The waves of technological change weren’t yet beginning to gain traction. Prospects and customers could only speak of your obsolescence with 10 or so others who resided within their geographic confines.  Today, prospects and customers have powerful tools at their disposal that, although dismissed as “visionary” or “pie-in-the-sky” ideas when authors like Bill Gates (The Road Ahead) and Seth Godin(Permission Marketing) first wrote about the today’s changes back in 1996.


The choice is whether to take the road less traveled or get left behind.